Less than a week to go to Election Day and the polls in Scotland still have the SNP way out in front.   Labour languishes, Lib Dems are nowhere and the Tories show a slight improvement. What does this indicate for the result north of the border?

To begin with we need a large pinch of salt. History suggests that pollsters regularly overestimate the Labour vote. For example in the 2005 election the consensus was a Labour vote of around 40% but in reality was a mere 35%. They didn’t do much better with the Lib Dems, in 2010 they estimated 31% for them while the result was just 23%. As far as the Tories were concerned in 2010 the polls under estimated the numbers by as much as 4%. The so called minor party votes were also underestimated by the pollsters.

The broad percentages in the polls disguise the impact of a “personal vote” in some places and splits in the opposing teams votes. For example in 2010 Dumfriesshire, Clydesdale and Tweeddale returned David Mundel as the only Tory from Scotland with 38% of the vote and the SNP nowhere.  However the Labour, the main opposition in the constituency, and the Lib Dems between them polled more than 50% of the vote. There are other constituencies with similar troubles, Berwickshire, Roxburgh & Selkirk for example. Here the main opposition to the sitting Lib Dem is the Tory party with Labour and the SNP also rans. This seat could easily fall to the Tories, similarly Aberdeenshire West & Kincardine.

The other big battle lies in Gordon also in NE Scotland. Here the sitting MP Malcolm Bruce who had a huge personal vote has retired.  The Lib Dem candidate, Christine Jardine faces Alex Salmond, former leader of the SNP who would need a 7% swing from LD to SNP to win the seat.  No-one I think is putting money on Ms Jardine.

So with salt cellar in hand herewith a few thoughts. 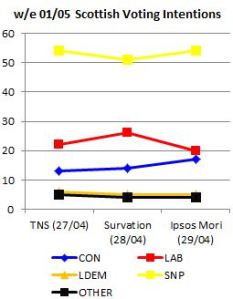