On the Marrakech initiatives.

The initiatives are being implemented in nearly all countries of the world indicating that climate action is fast becoming global affair. Initiatives that responded to the survey also indicate that Europe, Sub-Saharan Africa and Latin America and the Caribbean are the regions where most implementation activities are being carried out.

By 2017, there had been a rapid increase in the number of developing countries (low- and lower- middle income countries) where these initiatives are being implemented.

The scaling of implementation in low-income countries is especially high – between 2015 and 2017, the number grew by 56 per cent. This trend of broader geographical implementation needs to continue, especially among countries that are hardest hit by, and most vulnerable to, already occurring impacts of climate change and disasters.

Also here a more hopeful interview with Dr James Hansen, the former director of the NASA Goddard Institute for Space Studies and now an adjunct professor at Columbia University’s Earth Institute. A reminder that Trump is not the only game in town.

The graph that follows is from the COP 23 report and would suggest that the USA could do better in implementation. However for balance there is here another more hopeful article from the Washington Post. 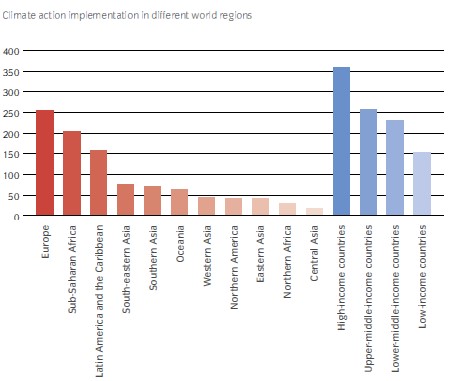